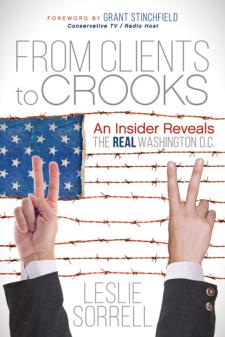 A former GOP political consultant exposes the corruption, greed, and dirty tricks that control our country in this tell-all memoir.   Leslie Sorrell started a successful and influential political consulting firm in Texas, working with many of the state’s Republican congressman. Her goal was to save the country by helping good people get into office and stay there. But over time she discovered the true character of these supposedly good people. Those experiences introduced Leslie to the real world of politics—the side media fails to cover.   Challenging a congressman in a primary election violates the political insider code, but Leslie did it anyway. She decided to work for congressional hopeful Grant Stinchfield, pitting herself against her own former client, Republican congressman Kenny Marchant—a man she had learned not to trust. Before the campaign was over, Leslie found herself stripped of every political ideal she ever had. And while she lost the race, she knows the real losers in American politics are the American people. But the first step toward taking our country back is exposing the truth.