Clocks in the Sky 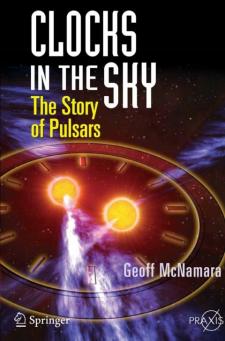 Pulsars are rapidly spinning neutron stars, the collapsed cores of once massive stars that ended their lives as supernova explosions. Pulsar rotation rates can reach incredible speeds, up to hundreds of times per second. The story of how an object ‘spins up’ to a significant fraction of the speed of light is fascinating and involves collapsing stellar cores following supernova explosions, while the faster ones result from stellar cannibalism. In this book, Geoff McNamara explores the history, subsequent discovery and contemporary research into pulsar astronomy. The story of pulsars is brought right up to date with the announcement in 2006 of a new breed of pulsar, Rotating Radio Transients (RRATs), which emit short bursts of radio signals separated by long pauses. These may outnumber conventional radio pulsars by a ratio of four to one. Geoff McNamara ends by pointing out that, despite the enormous success of pulsar research in the second half of the twentieth century, the real discoveries are yet to be made including, perhaps, the detection of the hypothetical pulsar black hole binary system by the proposed Square Kilometre Array - the largest single radio telescope in the world.