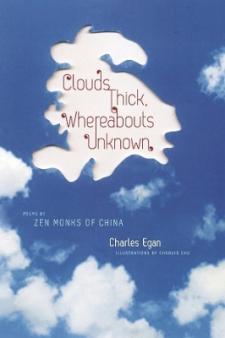 Compiled by a leading scholar of Chinese poetry, Clouds Thick, Whereabouts Unknown is the first collection of Chan (Zen) poems to be situated within Chan thought and practice. Combined with exquisite paintings by Charles Chu, the anthology compellingly captures the ideological and literary nuances of works that were composed, paradoxically, to "say more by saying less," and creates an unparalleled experience for readers of all backgrounds. Clouds Thick, Whereabouts Unknown includes verse composed by monk-poets of the eighth to the seventeenth centuries. Their style ranges from the direct vernacular to the evocative and imagistic. Egan's faithful and elegant translations of poems by Han Shan, Guanxiu, and Qiji, among many others, do justice to their perceptions and insights, and his detailed notes and analyses unravel centuries of Chan metaphor and allusion. In these gems, monk-poets join mainstream ideas on poetic function to religious reflection and proselytizing, carving out a distinct genre that came to influence generations of poets, critics, and writers.
The simplicity of Chan poetry belies its complex ideology and sophisticated language, elements Egan vividly explicates in his religious and literary critique. His interpretive strategies enable a richer understanding of Mahayana Buddhism, Chan philosophy, and the principles of Chinese poetry.