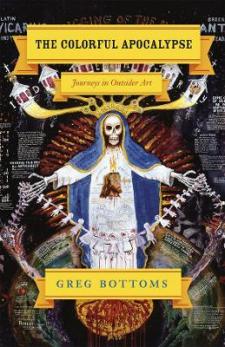 The Reverend Howard Finster was twenty feet tall, suspended in darkness. Or so be appeared in the documentary film that introduced a teenaged Greg Bottoms to the renowned outsider artist whose death would inspire him, fourteen years later, to travel the country. Beginning in Georgia with a trip to Finster's famous Paradise Gardens, his journey - of which The Colorful Apocalypse is a masterly chronicle - is an unparalleled look at the lives and works of some of Finster's contemporaries: the self-taught evangelical artists whose beliefs and neuvres occupy the gray area between madness and Christian ecstasy. Bottoms draws us into the worlds of such figures as William Thomas Thompson, a handicapped ex-millionaire who painted a 300-foot version of the book of Revelation, Norbert Kox, an ex-member of the Outlaws biker gang who now paints apocalyptic visual parables; and Myrtice West, who began painting to express the revelatory visions she had after her daughter's brutal murder.
Along the way, Bottoms weaves a powerful narrative, a work that is at once an enthralling travelogue, a series of revealing biographical portraits, and a profound meditation on the chaos of despair and the ways in which creativity can help order our lives.