Coming of the New Deal 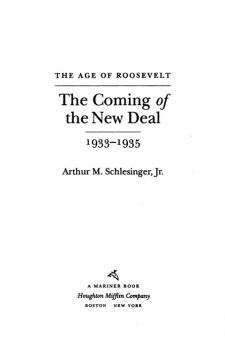 Volume two of the Pulitzer Prize-winning author's Age of Roosevelt series describes Franklin Delano Roosevelt's first tumultuous years in the White House.Coming into office at the bottom of the Great Depression, FDR told the American people that they have nothing to fear but fear itself. The conventional wisdom having failed, he tried unorthodox remedies to avert economic collapse. His first hundred days restored national morale, and his New Dealers filled Washington with new approaches to recovery and reform. Combining idealistic ends with realistic means, Roosevelt proposed to humanize, redeem, and rescue capitalism. The Coming of the New Deal, written with Schlesinger's customary verve, is a gripping account of critical years in the history of the republic.';Monumentalauthoritativespiritedone of the major works in American historical literature.'New York Times';Impelling, an achievement as much in its sensitivity as in its scholarshipIt is essential reading.'Kirkus Reviews