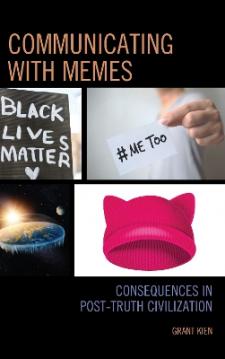 Communicating with Memes: Consequences in Post-truth Civilization investigates the consequences of memetic communication, the causes of these consequences, and what action-if any-should be taken in response. Communicating with memes across social media networks has become a commonplace activity in today's world, despite the fact that just years earlier, this mode of communication was a rarity. The rapid adoption of this new mode of communication through ubiquitous social media and device use is resulting in a major transformation of the ways in which we think and behave in our digital world. From the election of Donald Trump, to online harassment and identity theft, to the resurgence of once-eradicated diseases due to the anti-vaxxer movement, Grant Kien analyzes fourteen major consequences of this shift and confronts the question of how to approach these consequences.