A Companion to Ancient Greek and Roman Music 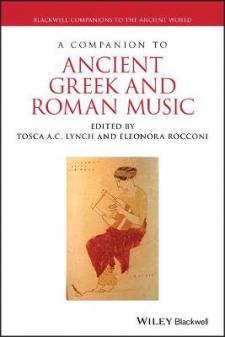 A COMPANION TO ANCIENT GREEK AND ROMAN MUSIC

A comprehensive guide to music in Classical Antiquity and beyond

Drawing on the latest research on the topic, A Companion to Ancient Greek and Roman Music provides a detailed overview of the most important issues raised by the study of ancient Greek and Roman music. An international panel of contributors, including leading experts as well as emerging voices in the field, examine the ancient 'Art of the Muses' from a wide range of methodological, theoretical, and practical perspectives.

Written in an engaging and accessible style, this book explores the pervasive presence of the performing arts in ancient Greek and Roman culture-ranging from musical mythology to music theory and education, as well as archaeology and the practicalities of performances in private and public contexts. But this Companion also explores the broader roles played by music in the Graeco-Roman world, examining philosophical, psychological, medical and political uses of music in antiquity, and aspects of its cultural heritage in Mediaeval and Modern times.

This book debunks common myths about Greek and Roman music, casting light on yet unanswered questions thanks to newly discovered evidence. Each chapter includes a discussion of the tools or methodologies that are most appropriate to address different topics, as well as detailed case studies illustrating their effectiveness. This book

Offers new research insights that will contribute to the future developments of the field, outlining new interdisciplinary approaches to investigate the importance of performing arts in the ancient world and its reception in modern culture

Traces the history and development of ancient Greek and Roman music, including their Near Eastern roots, following a thematic approach

Examines the political, social and cultural implications of music in antiquity, including ethnicity, regional identity, gender and ideology

Presents original diagrams and transcriptions of ancient scales, rhythms, and extant scores that facilitate access to these vital aspects of ancient music for scholars as well as practicing musicians

Written for a broad range of readers including classicists, musicologists, art historians, and philosophers, A Companion to Ancient Greek and Roman Music provides a rich, informative and thought-provoking picture of ancient music in Classical Antiquity and beyond.