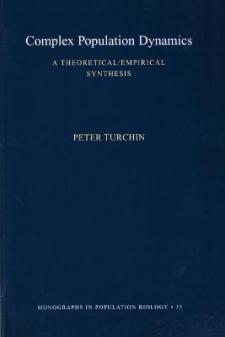 Why do organisms become extremely abundant one year and then seem to disappear a few years later? Why do population outbreaks in particular species happen more or less regularly in certain locations, but only irregularly (or never at all) in other locations? Complex population dynamics have fascinated biologists for decades. By bringing together mathematical models, statistical analyses, and field experiments, this book offers a comprehensive new synthesis of the theory of population oscillations. Peter Turchin first reviews the conceptual tools that ecologists use to investigate population oscillations, introducing population modeling and the statistical analysis of time series data. He then provides an in-depth discussion of several case studies--including the larch budmoth, southern pine beetle, red grouse, voles and lemmings, snowshoe hare, and ungulates--to develop a new analysis of the mechanisms that drive population oscillations in nature. Through such work, the author argues, ecologists can develop general laws of population dynamics that will help turn ecology into a truly quantitative and predictive science.
Complex Population Dynamics integrates theoretical and empirical studies into a major new synthesis of current knowledge about population dynamics. It is also a pioneering work that sets the course for ecology's future as a predictive science.