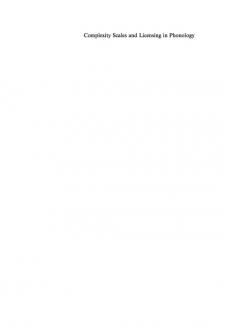 Complexity Scales and Licensing in Phonology

The aim of this book is to demonstrate that, in a representation-based model, the phonological organization of speech sounds within a word is reducible to the licensing properties of nuclei with respect to structurally defined complexities which pose varying demands on the licenser. It is assumed that the primitive licensing relation is that between a nucleus and its onset (O N). There are two main types of complexities concerning the onset position. Substantive complexity is an important aspect of phonological organisation at the melodic level, while the syllabic configurations in which the onset may be found are referred to under the heading of formal complexity.
At the melodic level, complexity is defined in terms of the number of privative primes called elements. The asymmetries in the subsegmental representations of consonants and vowels are shown to play a pivotal role in understanding a number of phenomena, such as typological patterns, markedness effects, phonological processes, segmental inventories, and, what is most important, the model allows us to see a direct connection between phonological representations and processes. For example, the deletion of [g] in Welsh initial mutations is strictly related to the fact that the prime which crucially defines this object also happens to be the target of Soft Mutation.
The complexity at the syllabic level is defined in terms of formal onset configurations called governing relations, of which some are easier to license than others. The formal complexity scale is not rerankable, and corresponds directly to the markedness of syllabic types. Since each formal configuration requires licensing from the following nucleus, syllable typology can be directly derived from the licensing strength of nuclei. The interaction between the higher prosodic organisation, for example, the level of the foot, and the syllabic level is also easily expressible in this model because higher prosody is built on nuclei. Therefore, prosody may tamper with the status of nuclei as licensers by deeming some of them as prosodically weaker than others, thus producing a non-rerankable scale of nuclear licensers (a " P). The inclusion of the empty nucleus as a possible licenser allows us to unify the scale of relatively marked contexts in segmental phenomena, and also to account for such problems as extrasyllabicity, complex clusters, super heavy rhymes, and other exceptional strings. The role of nuclei as licensers in unifying various levels of phonological representation from melody to word structure is unquestionable. There are other areas of phonological theory which can be expressed in this model. These include the role of nuclear strength scales in register switches, dialectal variation, historical development, language acquisition, and the interaction between phonology and morphology.