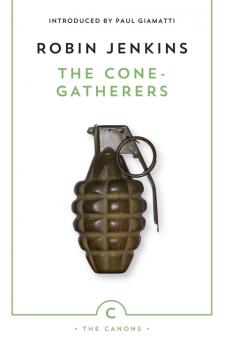 A haunting story of violence and love.

Calum and Neil are the cone-gatherers – two brothers at work in the forest of a large Scottish estate. But the harmony of their life together is shadowed by the obsessive hatred of Duror, the gamekeeper.

Set during the Second World War, Robin Jenkins’ greatest novel is an immensely powerful examination of good and evil, and mankind’s propensity for both. Removed from the destruction and bloodshed of the war, the brothers’ oblivious happiness becomes increasingly fragile as darker forces close in around them.

Suspenseful, dark and unforgettable, The Cone-Gatherers is a towering work of fiction, a masterpiece of modern Scottish literature.

‘Let me alert everyone to the best-kept secret in modern British literature. If you love the novel; if you are interested in books that are humane and wise, not slick and cynical; then treat yourself this year to some Robin Jenkins.’ Andrew Marr

‘A masterpiece of concision and terrible pathos.’ Isobel Murray

‘Like all the great masters, his skill is lightly worn, his sentences singing with what he does not say.’ The Times

‘Few novels in our heritage have the bell-like harmonies of this book . . . it has a strange, haunting poetic quality, conjuring from a few props a fable of eternal significance.’ Iain Crichton Smith