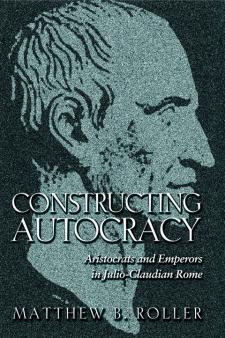 Rome's transition from a republican system of government to an imperial regime comprised more than a century of civil upheaval and rapid institutional change. Yet the establishment of a ruling dynasty, centered around a single leader, came as a cultural and political shock to Rome's aristocracy, who had shared power in the previous political order. How did the imperial regime manage to establish itself and how did the Roman elites from the time of Julius Caesar to Nero make sense of it? In this compelling book, Matthew Roller reveals a &quote;dialogical&quote; process at work, in which writers and philosophers vigorously negotiated and contested the nature and scope of the emperor's authority, despite the consensus that he was the ultimate authority figure in Roman society.Roller seeks evidence for this &quote;thinking out&quote; of the new order in a wide range of republican and imperial authors, with an emphasis on Lucan and Seneca the Younger. He shows how elites assessed the impact of the imperial system on traditional aristocratic ethics and examines how several longstanding authority relationships in Roman society--those of master to slave, father to son, and gift-creditor to gift-debtor--became competing models for how the emperor did or should relate to his aristocratic subjects. By revealing this ideological activity to be not merely reactive but also constitutive of the new order, Roller contributes to ongoing debates about the character of the Roman imperial system and about the &quote;politics&quote; of literature.