Constructing a Place of Critical Architecture in China 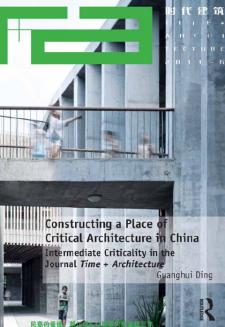 For the past 30 years, The Chinese journal Time Architecture (Shidai Jianzhu) has focused on publishing innovative and exploratory work by emerging architects based in private design firms who were committed to new material, theoretical and pedagogical practices. In doing so, this book argues that the journal has engaged in the presentation and production of a particular form of critical architecture - described as an ’intermediate criticality’ - as a response to the particular constraints of the Chinese cultural and political context. The journal’s publications displayed a ’dual critique’ - a resistant attitude to the dominant modes of commercial building practice, characterised by rapid and large-scale urban expansion, and an alternative publishing practice focusing on emerging, independent architectural practitioners through the active integration of theoretical debates, architectural projects, and criticisms. This dual critique is illustrated through a careful review and analysis of the history and programme of the journal. By showing how the work of emerging architects, including Yung Ho Chang, Wang Shu, Liu Jiakun and Urbanus, are situated within the context of the journal’s special thematic editions on experimental architecture, exhibition, group design, new urban space and professional system, the book assesses the contribution the journal has made to the emergence of a critical architecture in China, in the context of how it was articulated, debated, presented and perhaps even ’produced’ within the pages of the publication itself. The protagonists of critical architecture have endeavoured to construct an alternative mode of form and space with strong aesthetic and socio-political implications to the predominant production of architecture under the current Chinese socialist market economy. To rebel against certain forms of domination and suppression by capital and power is by no means to completely reject them; rather, it is to use thos