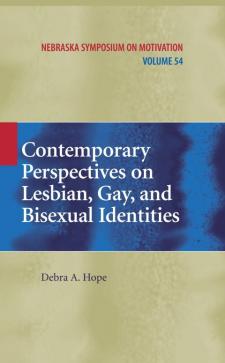 Debra A. Hope The Nebraska Symposium on Motivation is steeped in history and tradition. Over the years the series editors have striven to maintain the highest standards of a- demic excellence and to highlight some of the most important trends in psychology. Perusing the chapter titles in the first 53 volumes shows the shifting emphasis as the science of psychology developed in the latter half of the twentieth century. All of the most important topics are there - drive theory, social learning, the cognitive revolution, developing perspectives on understanding individual differences and the role of culture, and the increasing role of neuroscience. The key figures are there as well - Harry Harlow, Kenneth Spence, Raymond Cattell, George Kelly, Albert Bandura, Carl Rogers, Carroll Izard, Walter Mischel, Sandra Bem, Sandra Spence, Herbert Simon, David Barlow, and many others. In late 2004, I met with a group of interested graduate students, and together we developed a proposal to join this long and proud tradition with a volume on sexual orientation. Our motivation stemmed, in part, from the events around us. The same-sex m- riage debate was covered extensively in the media, reflecting a rapid and important discussion about sexual orientation that we were having (and are still having) as a society. Psychology and related fields have much to offer on many of the issues raised in this debate.