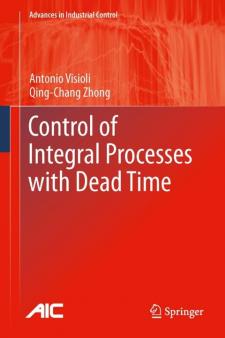 Integral processes with dead time are frequently encountered in the process industry; typical examples include supply chains, level control and batch distillation columns. Special attention must be paid to their control because they lack asymptotic stability (they are not self-regulating) and because of their delays. As a result, many techniques have been devised to cope with these hurdles both in the context of single-degree-of-freedom (proportional-integral-differential (PID)) and two-degree-of-freedom control schemes. Control of Integral Processes with Dead Time provides a unified and coherent review of the various approaches devised for the control of integral processes, addressing the problem from different standpoints. In particular, the book treats the following topics: • how to tune a PID controller and assess its performance; • how to design a two-degree-of-freedom control scheme in order to deal with both the set-point following and load disturbance rejection tasks; • how to modify the basic Smith predictor control scheme in order to cope with the presence of an integrator in the process; and • how to address the presence of large process dead times. The methods are presented sequentially, highlighting the evolution of their rationale and implementation and thus clearly characterising them from both academic and industrial perspectives. Control of Integral Processes with Dead Time will serve academic researchers in systems with dead time both as a reference and stimulus for new ideas for further work and will help industry-based control and process engineers to solve their control problems using the most suitable technique and achieving the best cost:benefit ratio.