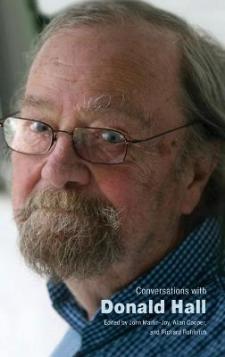 Conversations with Donald Hall offers a unique glimpse into the creative process of a major American poet, writer, editor, anthologist, and teacher. The volume probes in depth Hall's evolving views on poetry, poets, and the creative process over a period of more than sixty years. Donald Hall (1928-2018) reveals vivid, funny, and moving anecdotes about T. S. Eliot, Ezra Pound, and the sculptor Henry Moore; he talks about his excitement on his return to New Hampshire and the joys of his marriage with Jane Kenyon; and he candidly discusses his loss and grief when Kenyon died in 1995 at the age of forty-seven.

The thirteen interviews range from a detailed exploration of the composition of ""Ox Cart Man"" to the poems that make up Without, an almost unbearable poetry of grief that was written following Jane Kenyon's death. The book also follows Hall into old age, when he turned to essay writing and the reflections on aging that make up Essays after Eighty. This moving and insightful collection of interviews is crucial for anyone interested in poetry and the creative process, the techniques and achievements of modern American poetry, and the elusive psychology of creativity and loss.