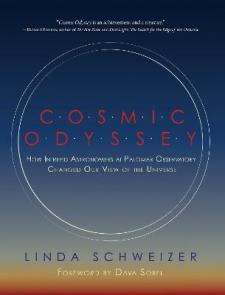 Ever since 1936, pioneering scientists at Palomar Observatory in Southern California have pushed against the boundaries of the known universe, making a series of dazzling discoveries that changed our view of the cosmos- quasars, colliding galaxies, supermassive black holes, brown dwarfs, supernovae, dark matter, the never-ending expansion of the universe, and much more. In Cosmic Odyssey, astronomer Linda Schweizer tells the story of the men and women at Palomar and their efforts to decipher the vast energies and mysterious processes that govern our universe.
Palomar was the Apollo mission of its era. The first images from the 200-inch George Ellery Hale telescope, commissioned in 1948 as the world's largest, generated as much excitement as images from the moon in 1969 and from the Hubble Space Telescope more recently. So far, Palomar's "Big Eye" and three other telescopes have yielded more than 75,000 telescope-nights of precious data. Schweizer takes readers behind the scenes of scientific discovery, mapping the often chaotic process of detours, dead ends, and serendipitous leaps of insight. Although her focus is on Palomar, she follows threads of discovery across the world to other teams and observatories. Based on more than one hundred interviews and enhanced by research in scientific journals, her account paints a fascinating picture of how discrete insights acquired over decades by researchers in a global community cascade, collide, and finally coalesce into the discoveries we come to accept as facts.