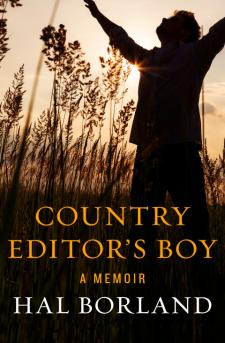 A memoir of youthful years spent in Colorado as the American West was transformed, by the author of High, Wide, and Lonesome and The Dog Who Came to Stay. Country Editor's Boypicks up where Hal Borland's classic memoirHigh, Wide and Lonesomeleft off: with Borland, on the cusp of adulthood in the early twentieth century, making his way in an eastern Colorado town that still retained all the flavors of the Old West. Borland's father, the editor of a local weekly newspaper, was working to help his publication transition along with the town around him. At the same time, young Hal was experiencing dramatic social and economic change in his own way. In a matter of a decade, Borland's Colorado town shifted from a frontier outpost to part of a rapidly urbanizing new America. This memoir shows a boy entering adulthood as the world around him comes of age. Evocative and wholly engrossing,Country Editor's Boyis a vividly drawn portrait of western life, by one of the greatest naturalist writers of his age.