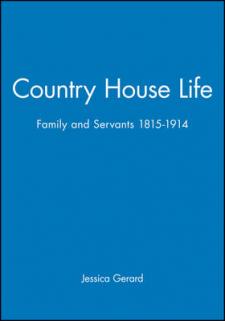 This is an account of the lives of the families and the servants of the British country house from the end of the Napoleonic wars to the onset of the Great War. It is a pioneering history based on contemporary records, diaries, private and public autobiographies, and on the childhood recollections of living descendants. Never before have the intimacies of life above and below stairs been depicted with such clarity and vividness. Country house family and servants were the two elites of British society and this was the period of their greatest prosperity. They were closely reliant on each other. 'Our servants and we are all members of a large family, who cannot get on independently of each other,' Lady Jenne wrote in 1892. The omnipresence of the servants affected every aspect of the family's behavior and the family shared the lives of the servants: the country house was a community. The power base of the nation's political establishment, it was also home - a tangible symbol of lineage, permanence and stability, embodying in its fabric, decoration and ritual the accumulations and memories of successive generations.
The book is illustrated with rare contemporary photographs, is fully referenced, has a wide ranging bibliography of primary and secondary sources, and is comprehensively indexed. Its evocation of a style of life and ways of living that have now largely vanished will be of equal interest to scholar, student and general reader.