A Course in Mathematical Logic for Mathematicians 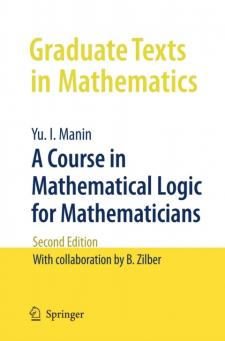 1. The ?rst edition of this book was published in 1977. The text has been well received and is still used, although it has been out of print for some time. In the intervening three decades, a lot of interesting things have happened to mathematical logic: (i) Model theory has shown that insights acquired in the study of formal languages could be used fruitfully in solving old problems of conventional mathematics. (ii) Mathematics has been and is moving with growing acceleration from the set-theoretic language of structures to the language and intuition of (higher) categories, leaving behind old concerns about in?nities: a new view of foundations is now emerging. (iii) Computer science, a no-nonsense child of the abstract computability theory, has been creatively dealing with old challenges and providing new ones, such as the P/NP problem. Planning additional chapters for this second edition, I have decided to focus onmodeltheory,the conspicuousabsenceofwhichinthe ?rsteditionwasnoted in several reviews, and the theory of computation, including its categorical and quantum aspects. The whole Part IV: Model Theory, is new. I am very grateful to Boris I. Zilber, who kindly agreed to write it. It may be read directly after Chapter II. The contents of the ?rst edition are basically reproduced here as Chapters I–VIII. Section IV.7, on the cardinality of the continuum, is completed by Section IV.7.3, discussing H. Woodin’s discovery.