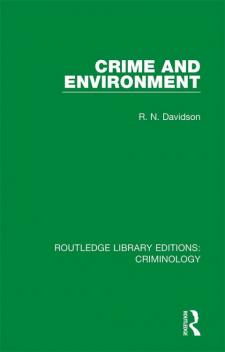 Originally published in 1981. This book unifies the diverse literature on the role of environmental factors in the uneven distribution of crime in society and provides an assessment of the validity of environmental explanations and their utility. It analyses and assesses the major work done by researchers in Britain, America and elsewhere. The extent of the differences between communities is reviewed from a number of perspectives. Offences are examined by location, nature and seriousness. Offenders are located in their environment and variations according to sex, age, race, social class, and recidivism are considered. The risks of victimisation also reflect environmental differences and need to be set in the context of wider community perceptions, fears, and attitudes to crime. The role of the community in the distribution of justice is also discussed.