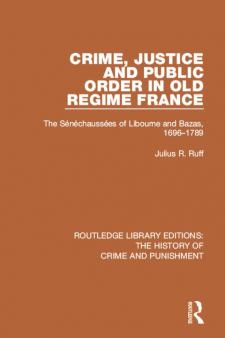 This title, first published in 1984, is a case study of crime and criminal justice in rural, southwestern France in the last century of the Old Regime. Based on extensive research in criminal court records, often the only documentary evidence of the poor and illiterate, the study is a valuable addition both to our knowledge of Old Regime society and to our understanding of its judicial institutions. Rural, Old Regime France seethed with violence. Assault, homicide, and a violence of speech occurred frequently at all levels of society. The author's finding that royal fiscal and judicial officials were recurring targets of this violence additionally contributes to our understanding of the revolutionary events ending the Old Regime. This system, providing in principle for judicial torture and corporal and capital punishments for relatively minor crimes, has long epitomized much that was wrong with pre-revolutionary France. But the law in principle is not the law in practice, and the author finds that both local and appeals courts seldom decreed such measures. This book will be of interest to students of history and criminology.