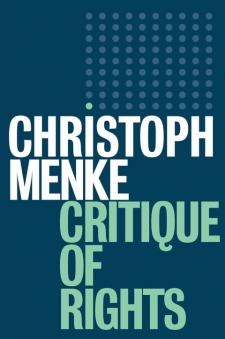 Modern political revolutions since the 18th century have swept away traditional systems of domination by declaring that ‘all men are created equal’. This declaration of equal rights is a fundamental political act - it is the political act in which the political community creates itself in relation to traditional systems of domination. But because it was generally assumed that the subject of these rights is the individual human being, the political community was subordinated to the individual. Marx discerned, rightly, that this was the paradox at the heart of the declaration of the rights of man.   But while Marx was right to highlight this paradox, his proposed solution does not provide us with a sound basis for overcoming it.

In this major new work, Christoph Menke adopts a different approach: he argues that we can address and overcome this paradox only by embarking on a fundamental inquiry into the nature of rights.  Rights are a specific configuration of normativity: to have a right is to have a justified and binding claim.  But with the equal rights declared by modern revolutions, rights assumed a particular form: the normative claim to equality was combined with an assumption about the factual conditions of social life.  In this conception, society is the realm of private individuals pursuing their interests, and private interests are therefore seen as the natural basis for politics - what Menke calls ‘the naturalization of the social’. By laying bare this conception which lies at the basis of political literalism and modern law, Menke is able to criticize and move beyond it, opening up a new way of understanding rights that no longer involves the disempowering of the political community.

This radical critique of rights and of modern law is a major contribution to critical theory and legal theory and it will be of great interest to students and scholars in social and political theory, philosophy and law.