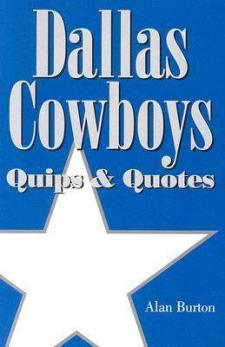 Alan Burton, a lifelong fan of the Dallas Cowboys, chronicles the team's forty-five year history in a collection of more than five hundred quips and quotes from players, coaches, owners, broadcasters, and writers. Organized chronologically, the quotations provide a colorful record of the ups and downs of one of the best-known franchises in professional sports - and ""must"" reading for the die-hard Dallas Cowboy fan. A few examples: Tom Landry on his Flex defense: ""It is designed to stop every play on the line of scrimmage. This is the theory, you have to remember, not necessarily the result."" Lineman Jim Boeke on quarterback Don Meredith: ""If Meredith had led us over a cliff, I would have been the first one to follow. He was that great a leader."" Linebacker D.D. Lewis on Texas Stadium: ""Texas Stadium has a hole in its roof so God can watch his favorite team play."" Caustic commentator Howard Cosell: ""The Cowboys are the most overrated, overhyped team in professional football."" Sportswriter Bob St. John on Roger Staubach's clean-cut image: ""His idea of breaking training is putting whipped cream on his pie."" A convicted murderer shortly before his execution: ""I am thankful to the Dallas Cowboys for giving me a lot of enjoyment the past years."" Lineman Nate Newton: ""Remember this - there's the Cowboys, and then there's the rest.