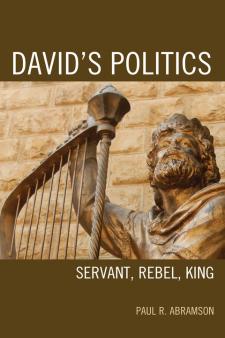 David's Politics evaluates what we can learn about politics by studying David's life as presented in the Books of Samuel through the first two chapters of 1 Kings. I begin by discussing the rules for kingship set forth in Deuteronomy and carry this through to the elders' demand that the prophet Samuel appoint a king. Despite his reluctance he appoints Saul, who has many military successes. But when he fails when he fails to annihilate the Amalekites God withdraws his grace and Saul falls into a state of depression, which grows worse as the story progresses.David is called to Saul's court as a musician. I argue that he has three roles, first as a servant to King Saul, second as a rebel against Saul, and third as king. As a servant to Saul, David establishes his credentials as a warrior and also becomes the king's son-in-law. As a rebel against Saul, David again takes actions that solidify his future support in Israel and Judah. David has two opportunities to kill Saul, but refuses to kill him. He also cements his political support in Judah.After becoming king, David's military successes are the prime reason for his support. He also administered justice, which may have further bolstered his legitimacy. Indeed, David did what was right ';all the days of his life, except in the matter of Uriah the Hittite' (1 Kings 15:5). By committing adultery with Bathsheba, Uriah's wife, and by having Uriah murdered, David brings grief upon himself and his family: the rape of his only named daughter, the murder of Amnon, his first-born son and the death in battle of Absalom, who is probably David's oldest surviving son. Throughout most of this account David displays remarkable political sagacity, and more can be learned studying his life than that of any other king of Israel or Judah.