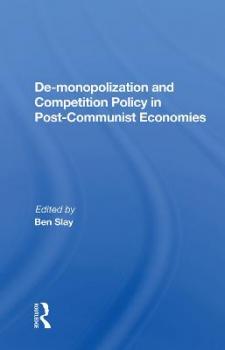 Even in developed capitalist economies, markets function poorly without regulation by competitive forces. The countries that once were part of the Eastern bloc are introducing market forces into industries created according to the monopolistic logic of central planning, so that competition policy plays an important role in the transition to capitalism. This interdisciplinary study examines how barriers to the development of competitive markets and competition policy are being overcome in Russia, Poland, Hungary, and Mongolia. A group of U.S., Russian, and East European specialists explores the institutions and programs of competition policy as well as its role in the overall post-Communist transition. Providing a complete, comparative picture of the development of competition policy in a broad cross section of formerly socialist countries, the contributors consider the extent of the post-Communist monopoly problem as well as progress in de-monopolization.