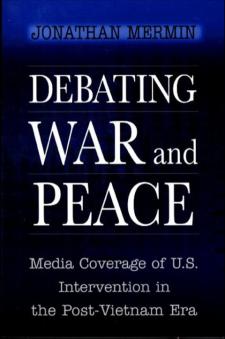 The First Amendment ideal of an independent press allows American journalists to present critical perspectives on government policies and actions; but are the media independent of government in practice? Here Jonathan Mermin demonstrates that when it comes to military intervention, journalists over the past two decades have let the government itself set the terms and boundaries of foreign policy debate in the news. Analyzing newspaper and television reporting of U.S. intervention in Grenada and Panama, the bombing of Libya, the Gulf War, and U.S. actions in Somalia and Haiti, he shows that if there is no debate over U.S. policy in Washington, there is no debate in the news. Journalists often criticize the execution of U.S. policy, but fail to offer critical analysis of the policy itself if actors inside the government have not challenged it. Mermin ultimately offers concrete evidence of outside-Washington perspectives that could have been reported in specific cases, and explains how the press could increase its independence of Washington in reporting foreign policy news. The author constructs a new framework for thinking about press-government relations, based on the observation that bipartisan support for U.S. intervention is often best interpreted as a political phenomenon, not as evidence of the wisdom of U.S. policy. Journalists should remember that domestic political factors often influence foreign policy debate. The media, Mermin argues, should not see a Washington consensus as justification for downplaying critical perspectives.