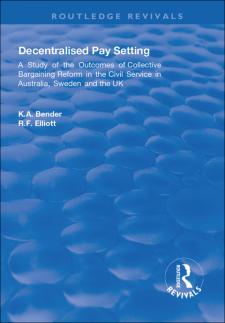 IThis title was first published in 2003. In the early 1990s, Australia, Sweden and the UK dismantled the old centralised pay setting systems which set the pay of civil servants and adopted decentralised pay systems. Consequently, these systems are now being considered by many other European countries as they look to reform their own systems. Bender and Elliott analyse the outcomes of these pioneering reforms in all three countries and, in doing so, provide the most detailed analysis of the pay of civil servants in these three countries to date. The authors further assess the effect that decentralisation had on the inequality of pay both within and between different departments, agencies and ministries. They identify the differences in the rates of pay growth for the different grades of civil servants that lie behind the changes in pay inequality, and assess whether decentralisation changed the way in which civil servants are paid.