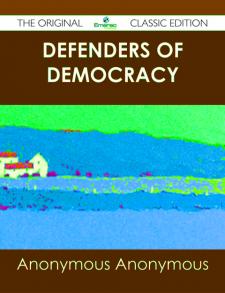 Finally available, a high quality book of the original classic edition of Defenders of Democracy. It was previously published by other bona fide publishers, and is now, after many years, back in print.

This is a new and freshly published edition of this culturally important work by Anonymous Anonymous, which is now, at last, again available to you.

Get the PDF and EPUB NOW as well. Included in your purchase you have Defenders of Democracy in EPUB AND PDF format to read on any tablet, eReader, desktop, laptop or smartphone simultaneous - Get it NOW.

Enjoy this classic work today. These selected paragraphs distill the contents and give you a quick look inside Defenders of Democracy:

With a profound sense of the solemn and even tragical character of the step I am taking and of the grave responsibilities which it involves, but in unhesitating obedience to what I deem my constitutional duty, I advise that the Congress declare the recent course of the Imperial German Government to be in fact nothing less than war against the Government and people of the United States; that it formally accept the status of belligerent which has thus been thrust upon it; and that it take immediate steps not only to put the country in a more thorough state of defense, but also to exert all its power and employ all its resources to bring the Government of the German Empire to terms and end the war.

...Even in checking these things and trying to extirpate them we have sought to put the most generous interpretation possible upon them because we knew that their source lay, not in any hostile feeling or purpose of the German people toward us (who were, no doubt, as ignorant of them as we ourselves were), but only in the selfish designs of a Government that did what it pleased and told its people nothing.