In Defense of a Political Court 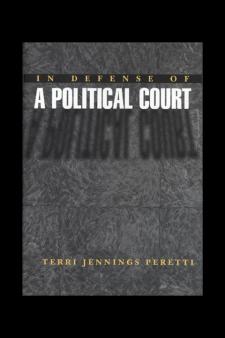 Can the Supreme Court be free of politics? Do we want it to be? Normative constitutional theory has long concerned itself with the legitimate scope and limits of judicial review. Too often, theorists seek to resolve that issue by eliminating politics from constitutional decisionmaking. In contrast, Terri Peretti argues for an openly political role for the Supreme Court. Peretti asserts that politically motivated constitutional decisionmaking is not only inevitable, it is legitimate and desirable as well. When Supreme Court justices decide in accordance with their ideological values, or consider the likely political reaction to the Court's decisions, a number of benefits result. The Court's performance of political representation and consensus-building functions is enhanced, and the effectiveness of political checks on the Court is increased. Thus, political motive in constitutional decision making does not lead to judicial tyranny, as many claim, but goes far to prevent it. Using pluralist theory, Peretti further argues that a political Court possesses instrumental value in American democracy. As one of many diverse and redundant political institutions, the Court enhances both system stability and the quality of policymaking, particularly regarding the breadth of interests represented.