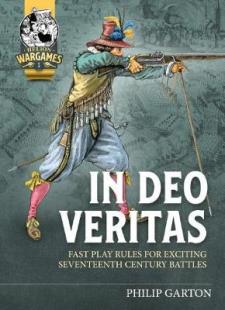 In seventeenth century Europe it must have seemed that there was always a conflict somewhere. This century of battles is the inspiration for these wargames rules.

Designed for ease of play, In Deo Veritas offers a player experience based on the commander's problems. The rules are designed to create a feel for the uncertainty of battle. Keeping the men going, even when things don't seem too good, is critical for success.

Units become progressively disabled as disorder sets in and cohesion begins to suffer. At the heart of the game is a simple Disorder Test. If commanders don't take care to maintain cohesion then their forces could be heading for destruction!

In weighing up the scale of your achievements at the end of the game, will you be able to claim a major victory in your dispatches? Just take care to remember that your next battle may not be so successful.

Using the smaller scales of 6, 10 or 15mm the usual 6' x 4' table gives a scale battlefield over a mile wide. This is large enough to cover all but the largest engagements.

The six historical battle scenarios provide different challenges and give players the insight into the nature of seventeenth century warfare. The Terrain Generator and a system of points allow the players to develop their own scenarios.

In battle nothing is certain but generals that practice their skills are more likely to be victorious.