Diel Vertical Migration of Zooplankton in Lakes and Oceans 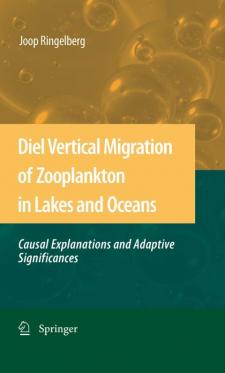 Whatever theory may be advanced to explain diurnal migration, the underlying reactions involved must be demonstrated conc- sively in the laboratory before the explanation can be ?nally accepted George L. Clarke 1933 p. 434 In oceans and lakes, zooplankton often make diel vertical migrations (DVM), descending at dawn and coming up again in late afternoon and evening. The small animals cover distances of 10–40 m in lakes or even a few hundred metres in the open oceans. Although not as spectacular as migrations of birds or the massive movements of large mammals over the African savannas, the numbers involved are very large and the biomass exceed the bulk of the African herds. For example, in the Antarctic oceans swarms of “Krill” may cover kilometres across, with thousands of individuals per cubic metre. These Euphausiids are food for whales, the most bulky animals on earth. Zooplankton are key species in the pelagic food web, intermediary between algae and ?sh, and thus essential for the functioning of the pelagic community. Prey for many, they have evolved diverse strategies of survival and DVM is the most imp- tant one. Most ?sh are visually hunting predators and need a high light intensity to detect the often transparent animals. By moving down, the well-lit surface layers are avoided but they have to come up again at night to feed on algae.