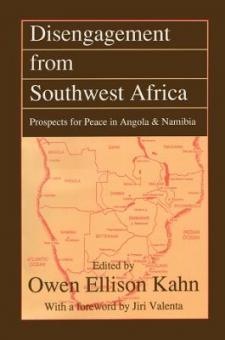 Gorbachev's new thinking on superpower relations assumes that struggle between two opposing world systems no longer characterizes the present era. This second volume in the East-South Relations series explores the implications of Gorbachev's new thinking for regional conflicts. Because these conflicts jeopardize tranquil relations between the United States and the Soviet Union, they are perceived as contrary to the new spirit of global cooperation. This volume suggests that the accords on Southwest Africa may illustrate how the superpowers will resolve conflict, and shows how smaller powers may now have new roles cast for them by the superpowers.

In 1975, Soviet-Cuban assistance to the Leninist-oriented Movement for the Popular Liberation of Angola (MPLA) was the first extensive Soviet-allied military intervention in the Third World. While the Soviet-backed Cubans propped up the MPLA, the South Africans intervened, on a smaller scale, in support of the National Union for the Total Independence of Angola (UNITA) under Jonas Savimbi. After 1985 UNITA began receiving United States support, and a military stalemate ensued. The contributors to this volume analyse how the Soviet Union and the United States used this stalemate to move the MPLA, Cuba and South Africa to settle not only their differences, but also the vexing question of the Independence of Namibia.

Central issues explored are how and why South Africa and Cuba got into the Angolan arena, why they stayed so long, and why they saw fit to get out. While the authors differ on the forces at work, their debate is itself enlightening, and offers valuable insights into the policy options of regional powers. The contributors also review further steps, beyond military disengagement, needed to finally resolve the Angolan civil war, and ensure regional stability. They assess the potential for breakdown of the accords, and the likely consequences should this occur.

Disengagement from Southwest Africa will interest policymakers and researchers concerned with developments in southern Africa and Cuba, and with relations between the superpowers.