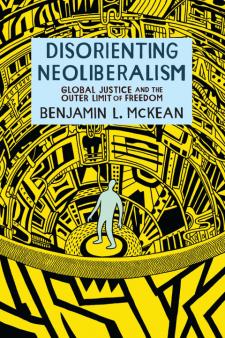 In the world neoliberalism has made, the pervasiveness of injustice and the scale of inequality can be so overwhelming that meaningful resistance seems impossible. Disorienting Neoliberalism argues that combatting the injustices of today's global economy begins with reorienting our way of seeing so that we can act more effectively. Within political theory, standard approaches to global justice envision ideal institutions, but provide little guidance for people responding to today's most urgent problems. Meanwhile, empirical and historical research explains how neoliberalism achieved political and intellectual hegemony, but not how we can imagine its replacement. Disorienting Neoliberalism argues that people can and should become disposed to solidarity with each other once they see global injustices as a limit on their own freedom. Benjamin L. McKean reorients us by taking us inside the global supply chains that assemble clothes, electronics, and other goods, revealing the tension between neoliberal theories of freedom and the hierarchical, coercive reality of their operations. In this new approach to global justice, he explains how neoliberal institutions and ideas constrain the freedom of people throughout the supply chain from worker to consumer. Rather than a linked set of private market exchanges, supply chains are political entities that seek to govern the rest of us. Where neoliberal institutions train us to see each other as competitors, McKean provides a new orientation to the global economy in which we can see each other as partners in resisting a shared obstacle to freedom and thus be called to collective action. Drawing from a wide range of thinkers, from Hegel and John Rawls to W. E. B. Du Bois and Iris Marion Young, Disorienting Neoliberalism shows how political action today can be meaningful and promote justice, moving beyond the pity and resentment global inequality often provokes to a new politics of solidarity.