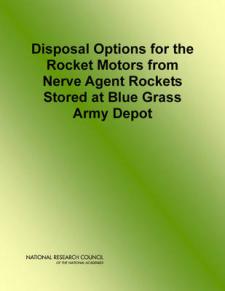 The Blue Grass Chemical Agent-Destruction Pilot Plant (BGCAPP) is under construction near Richmond, Kentucky, two dispose of one of the two remaining stockpiles of chemical munitions in the United States. The stockpile that BGCAPP will dispose of is stored at the Blue Grass Army Depot (BGAD). BGCAPP is a tenant activity on BGAD.

The stockpile stored at BGAD consists of mustard agent loaded in projectiles, and the nerve agents GB and VX loaded into projectiles and M55 rockets. BGCAPP will process the rockets by cutting them, still in their shipping and firing tube (SFT), between the warhead and motor sections of the rocket. The warhead will be processed through BGCAPP. The separated rocket motors that have been monitored for chemical agent and cleared for transportation outside of BGCAPP, the subject of this report, will be disposed of outside of BGCAPP. Any motors found to be contaminated with chemical agent will be processed through BGCAPP and are not addressed in this report.

Disposal Options for the Rocket Motors From Nerve Agent Rockets Stored at Blue Grass Army Depot addresses safety in handling the separated rocket motors with special attention to the electrical ignition system, the need for adequate storage space for the motors in order to maintain the planned disposal rate at BGCAPP, thermal and chemical disposal technologies, and on-site and off-site disposal options. On-site is defined as disposal on BGAD, and off-site is defined as disposal by a commercial or government facility outside of BGAD.