Do I Dare Disturb the Universe? 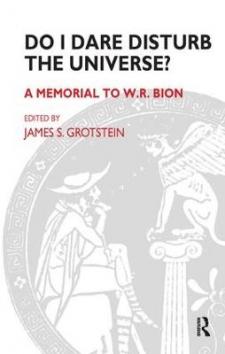 All the contributors to this compilation knew Bion personally and were influenced by his work. They include: Herbert Rosenfeld, Frances Tustin, Andre Green, Donald Meltzer and Hanna Segal.Wilfred R. Bion has taken his place as one of the foremost psychoanalysts of our time, yet it is only within recent years that the impact of his achievements are being felt. His death has stilled his pen and voice but demands a restatement of his view by those who have been most influenced by him. Bion's greatness lay, not only in the odd vertices of his incredible observations, but in the resources of his epistemological vastness, his respect for truth obtained in the disciplined absence of memory and desire, and his paying such scrupulous attention to and interpreting of recombinant constructions he achieved with mental elements their functions, and their transformations. His was the Language of Achievement, which is the tongue begotten by patience. Of note is his introduction of Plato's theory of forms and Kant's categories into psychoanalytic metapsychology, to say nothing of his mathematical, group and religious theories.