A Doctor on the Western Front 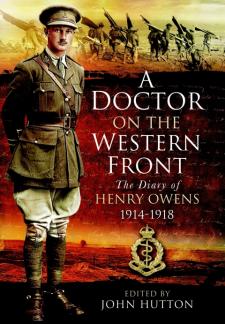 Henry Owens Great War diary provides a vivid and complete narrative, seen from the perspective of an army doctor, of what it was like to live and fight in the trenches of the Western Front. Owens, a member of the original British expeditionary Force, the Old Contemptibles, was among the first British soldiers to set foot in France. He spent the next four years in the front line as a doctor and a diarist, an eyewitness to some of the most bitter and violent struggles of the greatest conflict the world had ever seen. His writing, edited and with a full introduction by John Hutton, gives us an inside view of the duties and experiences of a doctor tending the fighting troops, and it paints a graphic portrait of the daily lives of the men themselves. Henry Owens was born into a doctors family in Long Stratton, Norfolk in 1889. When war was declared in 1914, he joined the Royal Army Medical Corps and was sent to France with the British Expeditionary Force. He served as a front-line medical officer throughout the conflict and he kept a diary and notes. After the war he used this material to assemble this meticulous account of his experiences. After being demobilized in 1919 he returned to civilian medical practice and married, but he died after a sudden illness in 1921, aged just 31. After the death of his wife in 1980, the diary came into the possession of the Imperial War Museum.