Doing Business with the Dictators 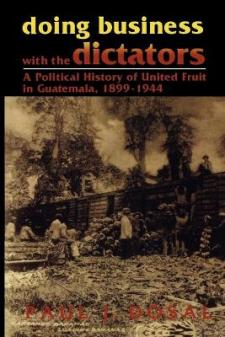 The United Fruit Company (UFCO) developed an unprecedented relationship with Guatemala in the first half of this century. By 1944, UFCO owned 566,000 acres, employed 20,000 people, and operated 96% of Guatemala's 719 miles of railroad, making the multinational corporation Guatemala's largest private landowner and biggest employer. In Doing Business with the Dictators, Paul J. Dosal shows how UFCO built up a profitable corporation in a country whose political system was known to be corrupt. His work is based largely on research of company documents recently acquired from the Justice Department under the Freedom of Information Act-no other historian researching this topic has looked at these sources. As a result, Dr. Dosal is able to offer the first documentary evidence of how UFCO acquired, defended, and exploited its Guatemalan properties by collaborating with successive authoritarian regimes.