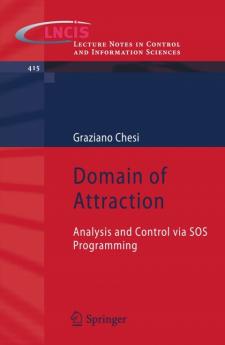 For nonlinear dynamical systems, which represent the majority of real devices, any study of stability requires the investigation of the domain of attraction of an equilibrium point, i.e. the set of initial conditions from which the trajectory of the system converges to equilibrium. Unfortunately, both estimating and attempting to control the domain of attraction are very difficult problems, because of the complex relationship of this set with the model of the system. Domain of Attraction addresses the estimation and control of the domain of attraction of equilibrium points via SOS programming, i.e. optimization techniques based on the sum of squares of polynomials (SOS) that have been recently developed and that amount to solving convex problems with linear matrix inequality constraints. A unified framework for addressing these issues is presented for in various cases depending on the nature of the nonlinear systems considered, including the cases of polynomial, non-polynomial, certain and uncertain systems. The methods proposed are illustrated various example systems such as electric circuits, mechanical devices, and nuclear plants. Domain of Attraction also deals with related problems that can be considered within the proposed framework, such as characterizing the equilibrium points and bounding the trajectories of nonlinear systems, and offers a concise and simple description of the main features of SOS programming, which can be used for general purpose in research and teaching.