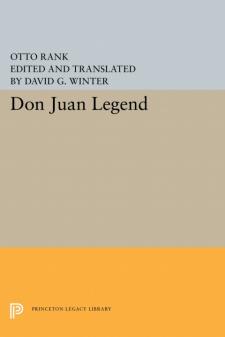 Originally published in 1924, this study of the Don Juan legend is a powerful interpretation of one of the most popular themes in Western culture. Also valuable for the insights it offers into Rank's thought immediately before his break with Freud, the book has not been available in English until now. Rank's study draws on psychoanalysis, literature, history, and anthropology to suggest some psychological mechanisms that operate both within the principal characters of the legend and within the audience or reader.Originally published in 1975.The Princeton Legacy Library uses the latest print-on-demand technology to again make available previously out-of-print books from the distinguished backlist of Princeton University Press. These editions preserve the original texts of these important books while presenting them in durable paperback and hardcover editions. The goal of the Princeton Legacy Library is to vastly increase access to the rich scholarly heritage found in the thousands of books published by Princeton University Press since its founding in 1905.