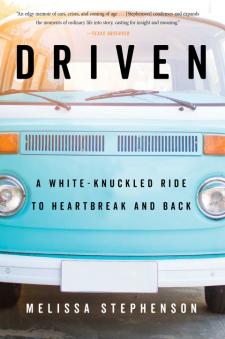 For fans ofWild,a memoir of one woman's road to hope following her troubled brother's death, told through the series of cars that transported her. Growing up in a blue-collar, Midwestern family, Melissa Stephenson longed for escape. Her wanderlust was an innate reaction to the powerful personalities around her, and came too from her desire to find a place in the world where her artistic ambitions wouldn't be thwarted. She found in automobiles the promise of a future.From a lineage of secondhand family cars of the late '60s, to the Honda that carried her from Montana to Texas as her new marriage disintegrated, to the '70s Ford she drove away from her brother's house after he took his life (leaving Melissa the truck, a dog, and a few mix tapes), to the VW van she now uses to take her kids camping, she knows these cars better than she knows some of the people closest to her.Driven from grief and toward hope, Melissa reckons with what it means to lose a beloved sibling.Drivenis a powerful story of healing, for all who have had to look back at pain to find the way forward.';Written with a poet's ear and a traveler's grit, and it will be a comfort to anyone who has watched a loved one self-destruct.'Sarah Hepola, author ofBlackout';Not all writers are survivors and not all survivors are writers, but Melissa Stephenson is both and goddamn is she good.Drivenis a book you will want to hold right against your heart, to take with you everywhere you go.'Domenica Ruta, author ofWith or Without You