The Dynamics of Russian Politics 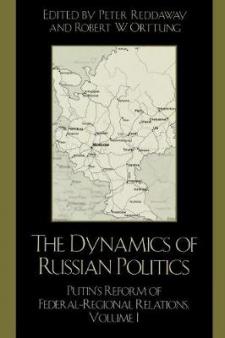 Who rules Russia? This question is generated by President Vladimir Putin's most ambitious reform program to date_his attempt since 2000 to reshape the Russian federation, centralize much of the power lost by the Kremlin to the eighty-nine regional governors during the 1990s, and strengthen his weak grip on Russia's institutions and political elite. In The Dynamics of Russian Politics Russian and Western authors from the fields of political science, economics, ethnology, law, and journalism examine the reform's impact of key areas of Russian life, including big business, law enforcement, corruption, political party development, health care, local government, small business, and ethnic relations. Volume I presents the historical context and an overview of the reforms, then tracks how Putin's plans were implemented and resisted across each of the seven new federal okrugs, or megaregions, into which he divided Russia. In particular, the authors analyze the goals and contrasting political styles of his seven commissars and how their often-concealed struggles with the more independent and determined governors played out. Volume II examines the impact of these reforms on Russia's main political institutions; the increasingly assertive business community; and the defense, police, and security ministries. Together, the two volumes simultaneously reveal that Putin's successes have been much more limited and ambiguous than is widely believed in the West while offering detailed and nuanced answers to the difficult but crucial question: Who rules Russia?