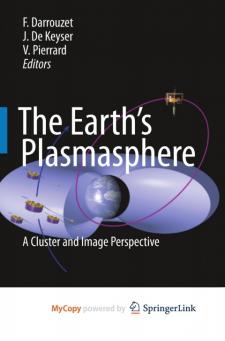 James L. Burch·C. Philippe Escoubet Originally published in the journal Space Science Reviews, Volume 145, Nos 1–2, 1–2. DOI: 10. 1007/s11214-009-9532-7 © Springer Science Business Media B. V. 2009 The IMAGE and CLUSTER spacecraft have revolutionized our understanding of the inner magnetosphere and in particular the plasmasphere. Before launch, the plasmasphere was not a prime objective of the CLUSTER mission. In fact, CLUSTER might not have ever observed this region because a few years before the CLUSTER launch (at the beginning of the 1990s), it was proposed to raise the perigee of the orbit to 8 Earth radii to make multipoint measu- ments in the current disruption region in the tail. Because of ground segment constraints, this proposal did not materialize. In view of the great depth and breadth of plasmaspheric research and numerous papers published on the plasmasphere since the CLUSTER launch, this choice certainly was a judicious one. The fact that the plasmasphere was one of the prime targets in the inner magnetosphere for IMAGE provided a unique opportunity to make great strides using the new and comp- mentary measurements of the two missions. IMAGE, with sensitive EUV cameras, could for the rst time make global images of the plasmasphere and show its great variability d- ing storm-time. CLUSTER, with four-spacecraft, could analyze in situ spatial and temporal structures at the plasmapause that are particularly important in such a dynamic system.