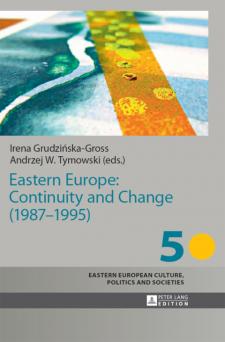 The book consists of articles from East European Politics and Societies, a journal published in the United States that first appeared in 1987. This selection is composed of papers written by the journal’s founders and early authors, among them Zygmunt Bauman, Tony Judt, Katherine Verdery, Vladimir Tismaneanu, Elemer Hankiss, Vesna Pusic, Maria Todorova. The first section Before the Change consists of texts written in the late 1980s; its authors tried to identify the cracks that would undermine or reform the existing system. In the second part of the book Alternative Futures contributors sketched the directions of the changes as they were just getting underway. The authors hoped that politics, economics, and societies were now free to reinvent themselves. The texts in the third section, Legacies of the Past, written before, during, and after the time of most drastic changes, show how the shadows cast by the histories of individual nations and the region as a whole continued to burden political strategies as well as daily lives.