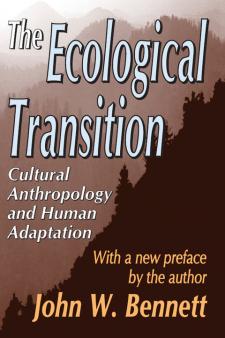 Written during the height of the ecology movement, The Ecological Transition is a stunning interdisciplinary work. It combines anthropology, ecology, and sociology to formulate an understanding of cultural-environmental relationships. While anthropologists have been studying relationships between humans and the physical environment for a very long time, only in the last thirty years have questions inherent in these relationships broadened beyond description and classification. For example, the concept of environment has been extended beyond the physical into the social. Although anthropologists have adopted many of the concepts that Bennett develops in the book, he also feels that the central issues have never been addressed, either by anthropologists or by people in related disciplines. The most important of these, in Bennett's opinion, is the failure to incorporate a respect for the environmental in contemporary culture, which would allow making exceptions in certain human practices in order to protect the environment. His point in The Ecological Transition is that a basic cultural change in modern civilization is necessary to achieve this end. Both a theoretical and a practical work, The Ecological Transition emphasizes the relationships between human culture, the physical environment, technology, and social policy. The Ecological Transition is a challenging volume that makes us face the consequences of human behavior in the modern world: its effect on pollution, natural resources, agriculture, the economy, and population, to name just a few areas. The book remains a significant contribution to the discourse on social, economic, and environmental problems. While the book was first published in 1976, it still reads as a contemporary tract.