The Ecology of the English Outlaw in Medieval Literature 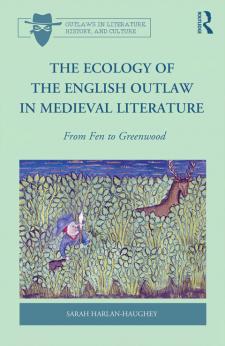 Arguing that outlaw narratives become particularly popular and poignant at moments of national ecological and political crisis, Sarah Harlan-Haughey examines the figure of the outlaw in Anglo-Saxon poetry and Old English exile lyrics such as Beowulf, works dealing with the life and actions of Hereward, the Anglo-Norman romance of Fulk Fitz Waryn, the Robin Hood ballads, and the Tale of Gamelyn. Although the outlaw's wilderness shelter changed dramatically from the menacing fens and forests of Anglo-Saxon England to the bright, known, and mapped greenwood of the late outlaw romances and ballads, Harlan-Haughey observes that the outlaw remained strongly animalistic, other, and liminal. His brutality points to a deep literary ambivalence towards wilderness and the animal, at the same time that figures such as the Anglo-Saxon resistance fighter Hereward, the brutal yet courtly Gamelyn, and Robin Hood often represent a lost England imagined as pristine and forested. In analyzing outlaw literature as a form of nature writing, Harlan-Haughey suggests that it often reveals more about medieval anxieties respecting humanity's place in nature than it does about the political realities of the period.