From Economic Crisis to Reform 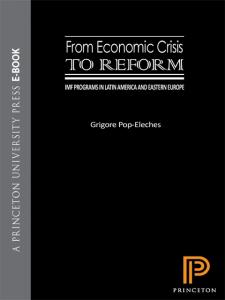 This is a collection of the late Heda Segvic's papers in ancient moral philosophy. At the time of her death at age forty-five in 2003, Segvic had already established herself as an important figure in ancient philosophy, making bold new arguments about the nature of Socratic intellectualism and the intellectual influences that shaped Aristotle's ideas. Segvic had been working for some time on a monograph on practical knowledge that would interpret Aristotle's ethical theory as a response to Protagoras. The essays collected here are those on which her reputation rests, including some that were intended to form the backbone of her projected monograph. The papers range from a literary study of Homer's influence on Plato's Protagoras to analytic studies of Aristotle's metaphysics and his ideas about deliberation. Most of the papers reflect directly or indirectly Segvic's idea that both Socrates' and Aristotle's universalism and objectivism in ethics could be traced back to their opposition to Protagorean relativism. The book represents the considerable achievements of one of the most talented scholars of ancient philosophy of her generation.