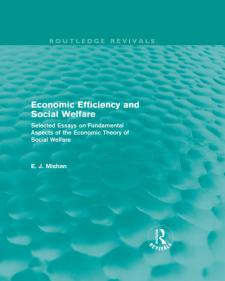 First published in 1981, Professor Mishan’s Economic Efficiency and Social Welfare: Selected Essays on Fundamental Aspects of the Economic Theory of Social Welfare is a collection of 22 pioneering essays written while the author was teaching at the London School of Economics and chosen to indicate landmarks in the development of his own thought. Professor Mishan, who also enjoys an international reputation as a popular writer on the impact of modern economic growth on social welfare, is among the foremost authorities in the field of resource allocation, and his influence in his subject area has been profound. Mishan’s essays, while generally accessible to the layman due to the author’s lucidity, his economy in the use of mathematical notation and his concern with perspective, are invaluable reading for the economics undergraduate. The essays are particularly relevant to upper level students of project appraisal, welfare economics and cost benefit analysis requiring a coherent survey of their field of study.