Edgar Cayce A Seer Out of Season 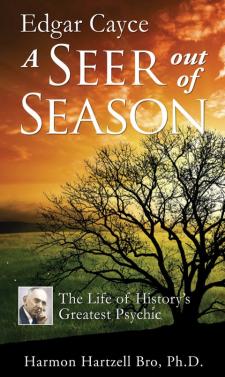 Millions worldwide have turned to the readings of Edgar Cayce for advice on health and spiritual growth. Hailed as the “father of holistic medicine” as well as the catalyst for the New Age movement, his works have been translated into dozens of languages, and he has received outpourings of acclaim from individuals, doctors, and spiritual leaders around the globe. As predicted by his own psychic readings, the Cayce material has changed the thought of humankind. Drawing from his experience as Cayce’s longtime associate, Dr. Harmon Bro has written a firsthand account in this full-length biography of the gifted psychic. His intimate prose tells the story of an enigmatic Kentucky farm boy with no formal education who became the soft-spoken seer who inspired so many and left a legacy of more than 14,000 documented readings behind. It is also the story of a man who worked laboriously to help others—even at the cost of his own health and eventually his life.