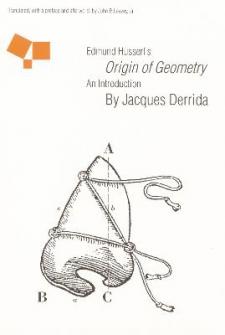 Edmund Husserl's Origin of Geometry": An Introduction (1962) is Jacques Derrida's earliest published work. In this commentary-interpretation of the famous appendix to Husserl's The Crisis of European Sciences and Transcendental Phenomenology, Derrida relates writing to such key concepts as differing, consciousness, presence, and historicity. Starting from Husserl's method of historical investigation, Derrida gradually unravels a deconstructive critique of phenomenology itself, which forms the foundation for his later criticism of Western metaphysics as a metaphysics of presence. The complete text of Husserl's Origin of Geometry is included.