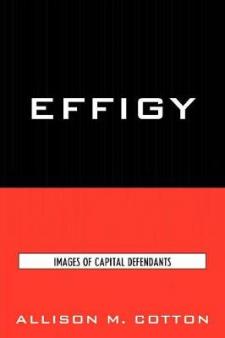 Effigy examines the images of a capital defendant portrayed, by the defense attorneys and the prosecutor, during the guilt and penalty phases of capital trial, the trial tactics used to impart these images, and the consequences that result from the jury's attempt to reconcile contradictory images to place one in permanent record as a verdict. These images are starkly contrasted against the backdrop of a brutal murder in which the stereotypes of American fear are realized: Donta Page, the defendant, is an African-American male from a low-income segment of society while Peyton Tuthill, the victim, was a Caucasian female from a middle-income suburb. The prosecuting attorneys depict the defendant as a 'savage beast,' juxtaposing their image against that of a 'troubled youth' as Page is portrayed by the defense attorneys. Slowly and methodically developed as figures with diametrically opposed features, none of which overlap or congeal, both the images are portrayed as real (buttressed by the testimony of witnesses) rather than constructed. The jury is expected to render a verdict that accepts one and rejects the other: there is no middle ground.